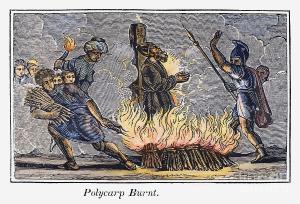 Polycarp was arrested for being a follower of Christ. The Roman proconsul, Statius Quadratus, urged Polycarp to curse Christ and save his life. But the life-long believer remained strong in his convictions, giving the proconsul and all those in attendance his famous reply:

“Fourscore and six years have I served him, and he has done me no harm. How then can I curse my King that saved me? You threaten the fire that burns for an hour and then is quenched; but you know not of the fire of the judgment to come, and the fire of the eternal punishment. Bring what you will.”

It was too late to feed Polycarp to the beasts, as was the norm for arrested Christians. So the proconsul decided to burn him at the stake. The crowd eagerly gathered wood for the fire. Polycarp was to be burned alive. When soldiers started to nail him to the stake, he stopped them. “Leave me as I am. For He who grants me to endure the fire will enable me also to remain on the pyre unmoved.”

The faithful servant was spiritually steeled to the moment.

Indeed, he was unmoved in the flames.

As the pyre was set ablaze, Polycarp prayed again. “Lord God, Father of our blessed Saviour, I thank you that I have been deemed worthy to receive the crown of martyrdom, and that I may die for you and for your cause.” The multitude that had gathered to watch were dismayed at his serenity and willingness — a sharp contrast to when unbelievers were killed in the stadium.

Polycarp’s body was burned down to the bones, which were collected by Christians and buried. His death was remembered throughout the Christian world.

Polycarp lived and died as a Christian for the world to see, and followed Ignatius in helping set the stage firmly for the early church — in word and in action. He battled heresies that threatened the core of Christianity and he endured persecutions until finally being martyred, a formula that would be followed by many.

My Tweets
Join 14 other subscribers