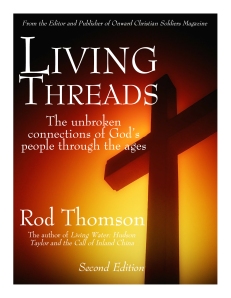 I began piecing them together and realized that there might be a contiguous line of connections. After perhaps a year of research, that full line came into view, from the Apostle John and Ignatius to Watchman Nee and Billy Graham.

That became Living Threads — the thread of influences winding nearly two millennia and binding together part of the tapestry of our Christian heritage. And even more, showing us the result of living faithful lives.

Living Threads is only one thread out of thousands, maybe millions, but it is one we can document.

You can buy Living Threads at: http://www.amazon.com/Living-Threads-unbroken-connections-through-ebook/dp/B009JMGAP4

My Tweets
Join 14 other subscribers